Oh well. Danny Gokey is goin' home. I am bummed. I am tired of the judges all gushing and mushing about Adam. eh? But I knew that it couldn't be a Kris and Danny Finale - they are just a little bit too similar style-wise. But I have hopes now that anyone who was voting for Danny will now vote for Kris and blow Adam out of the water! Go Kris!

On the homefront, I have 72 crazy, frenzied hours ahead of me. I co-chair the HUGE Gi-norm-ous sale for my Mothers of Multiples Group. There are 30+ sellers this time around, we rent a building on our county fairgrounds and we fill 25 racks with clothing and the rest of the barn with other baby/child/household gear, toys and paraphernalia! It's a major fundraiser for our club, plus we all make a pretty nice chunk of change for our own pockets! But it's a crazy and busy couple of days and as co-chair I will pretty much abandon my family for the next 72 hours.

Oh well #2. My crazy busy sale weekend means that we have to miss out on seeing Roger Clyne & the Peacemakers in concert. Cuz...ya know...we kinda like this band. Just a little. Just look at him!
(This is us with Rog in Mexico) 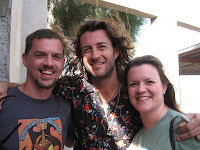 and here's just a really pretty picture of him...

(I'm pretty sure I am breaking at least two commandments just looking at it.)

He is an amazing songwriter/musician and he, along with the Peacemakers, puts on a smokin' hot show of full out, tequila infused, no holds barred, rock and roll, and thankfully The Hubs loves their music as much I do. Cuz' it's not ALL about the pretty face people. But it certainly doesn't hurt now does it??

We've ONLY seen them 8 times in 2 years, including a trip to Mexico (yes that's right, we flew 2000 miles and drove another 4 hours after that, with all 4 kiddos after for a concert. In Mexico. So worth it!) Anyway, they are playing in a town near us and we have to miss this one due to an overwhelming schedule and I am bummed.

The last oh well is the worst. See, it's my guy's birthday on Friday. Not just any birthday either. It's a biggie. Yes...the 4-0. Eek! We both turn 40 this year - exactly 30 weeks apart. And I am feeling pretty crummy that I haven't and won't be able to work something out to ring in this new decade for him. (And going to see Rog and the Peacemakers was supposed to be part of the deal!) I actually told him maybe he should just go buy another new guitar so I could quit feeling so guilty for being such loser wife and not throwing a big party. I think a few of my awesome wife points will be lost for this one. I promise Honey..I will make it up to you.

what I'm talking about

blogs that make my day